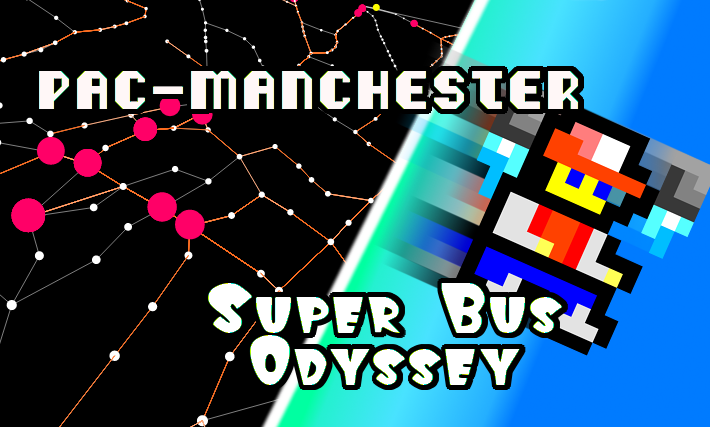 Last month (23rd - 24th March 2013) we took part in Future Everything's 24 hour Routes to the future: An Innovation Challenge hackathon. The goal was to

“build new, useful applications from TfGM’s data that will improve the public transport experience for people of Greater Manchester”.

So we stepped into our programming pentagram and summoned from our keyboards two digital demons:

Pac-Manchester (3D/Laptop/Desktop). Made in the weekend, not as much a game as a visualisation.

Super Bus Odyssey (2D/Mobile/Laptop/Desktop). A mobile-friendly version, that took us a bit longer than a weekend, not as much a visualisation as a game.

Is HTML5 the right technology for games?

We wanted everyone to be able to play our game (note, that's different from everyone wanting to play our game), so we chose to make it an HTML5 game, the theory being there would be less coding and more rolling in a pit of money.

Using open data to create Pac-Man where buses are ghosts

You (a human being in real life) boards a bus, whips out your smart phone and starts playing Pac-Manchester. You enter a familiar, yet fantastic world where:

Is using real world data to create a game a good idea?

Get dirrty - with data

We used the following datasets:

The bus routes data looks like this in Google Earth. 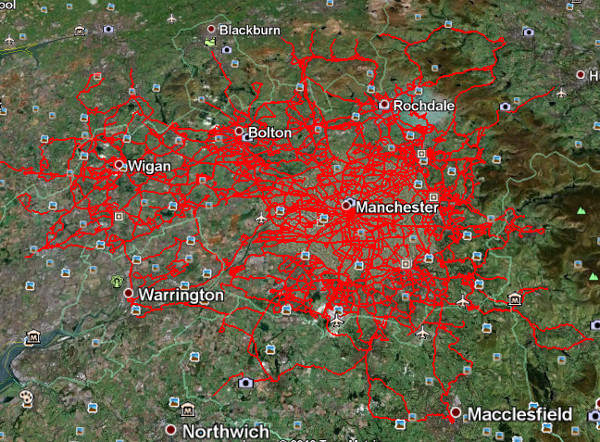 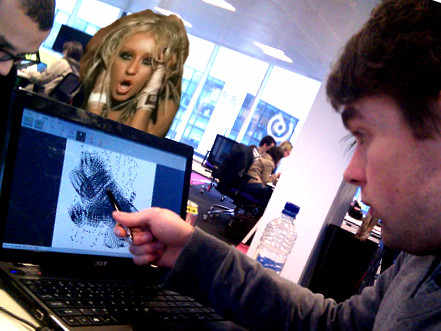 The schedules gives you buses journeys in terms of a sequence of bus stops and timestamps. But it doesn't tell you on which roads the buses travel, so you can't make them travel around a map.

The routes data tell you the path a service follows (sort of), but it doesn't link the path to the roads. So, if two services follow the path, you have two path over the top of each other.

Also, the paths aren't perfect: they are a set of out-of-order non-continuous lines. You can see this in the plot below there are gaps and plenty of duplicate points. 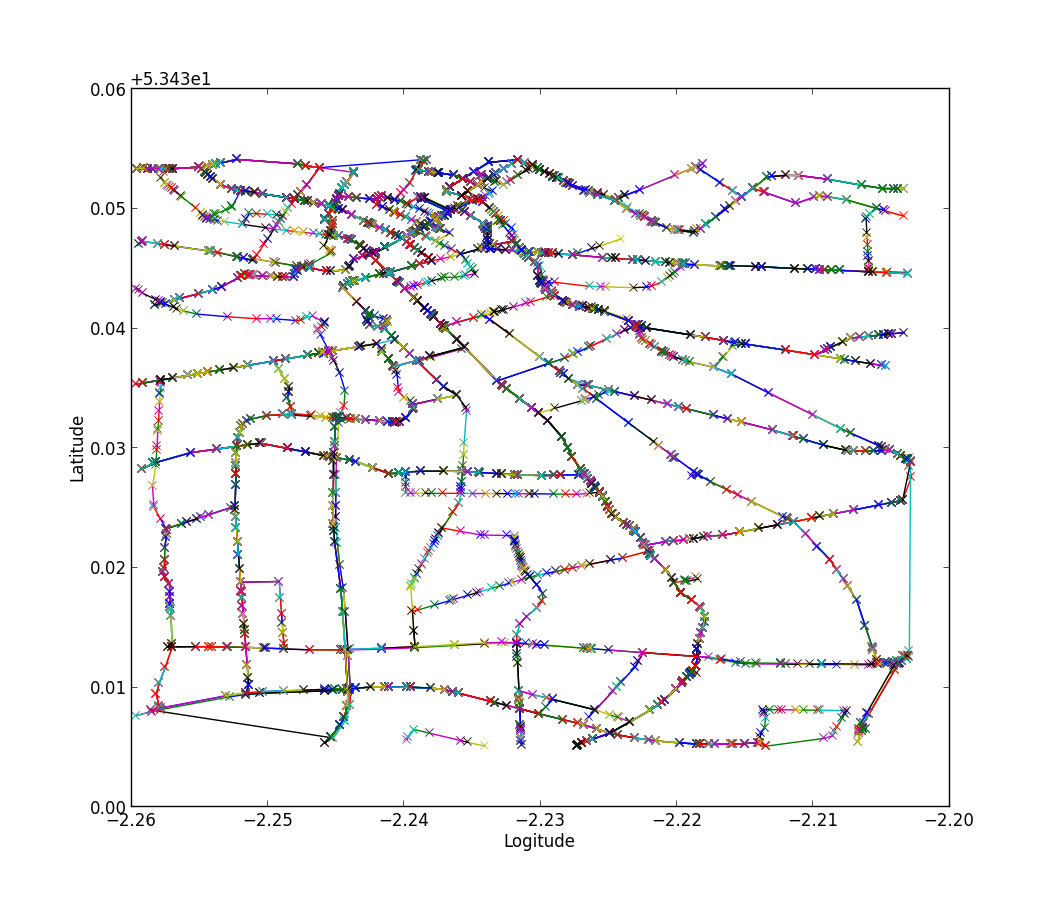 To clean this data we created a program that took the raw routes and flattened them into a connect graph with duplicates and overlaps removed (see the plot below). It also mapped the bus stops to the graph, allowing us to move buses around properly. 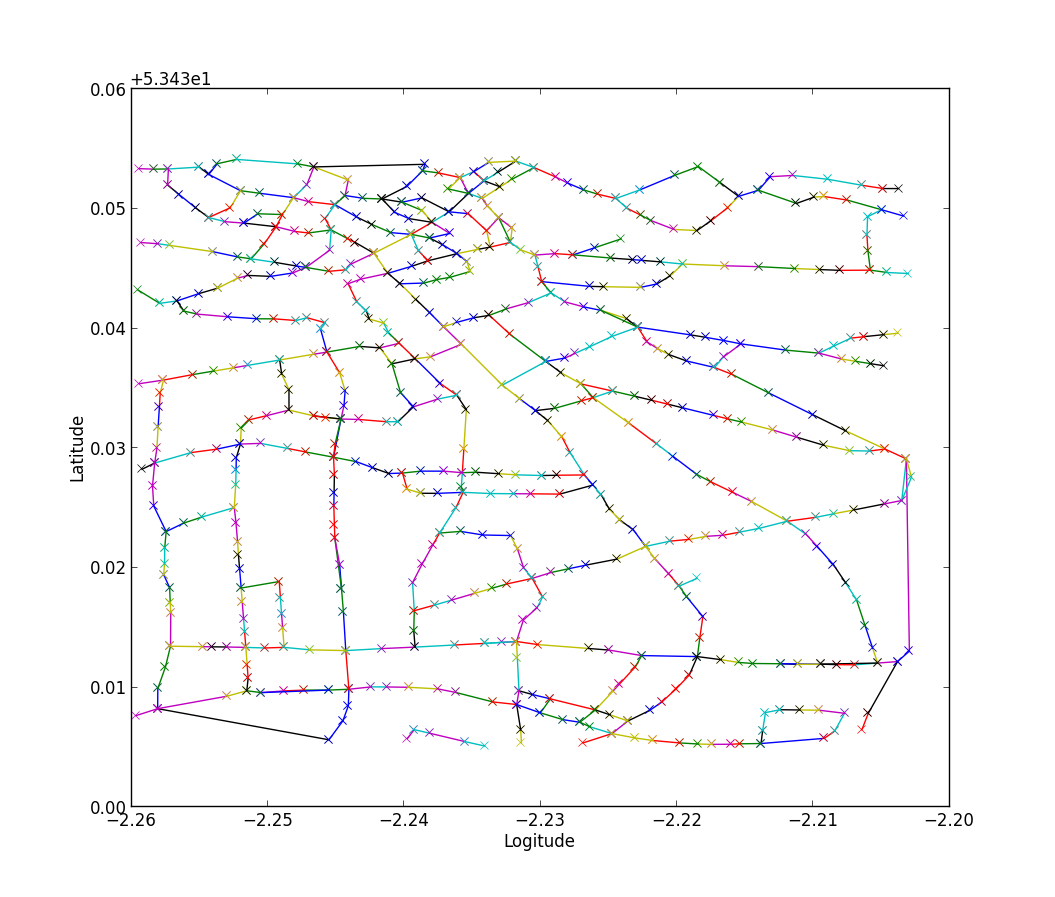 With our level generated from the data, we needed a way of visualising it. During the weekend hackathon we used three.js to create "Pac-Manchester". 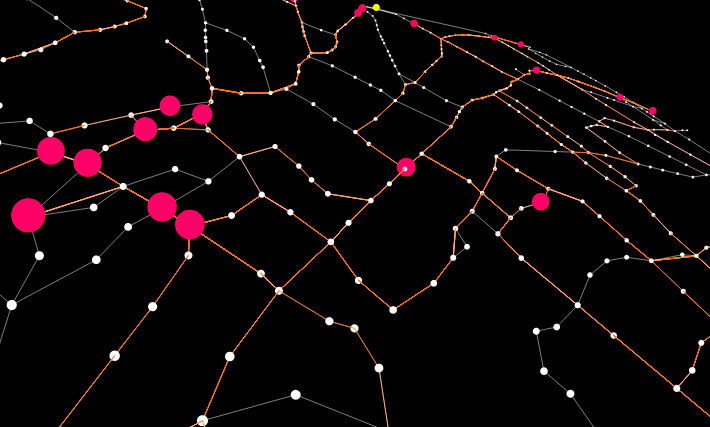 At the Hackathon we were lucky enough to win the Developers prize (voted for by the participants) for our creation.

What were we to do with a monkey? Well, we thought it best to buy time to actually make it work on mobile phones. You see, although it ran well on our laptops,on mobile devices it ran at 1fps - which was a big problem as we wanted people to be able to play while they were on the bus. 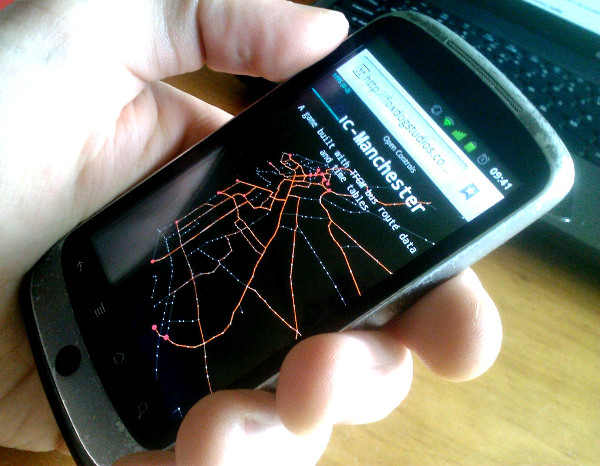 Going down to 2D for mobiles

Initially we went loopy on the premature optimization juice, which left us with an unmanageable mess. It did however allow us to pin down what actually made a difference to the frame rate, and it was all to do with drawing on the canvas.

The main things we did to make it run well on the mobile devices were: 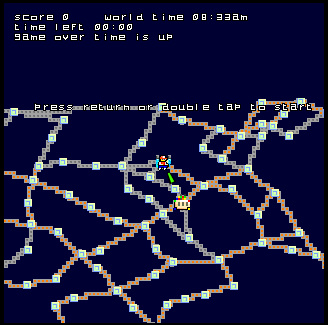 Since the move to mobile meant we were dealing with pixels, we decided to add a little charisma to our circles and give them a fresh lick of sprite art. We render them to their own canvas then on each frame copy the corresponding portion to the world canvas.

We created them using Aseprite

Finally, a note on Microsoft oddities

In a past life, Microsoft gave us devices running Windows Phone 7. We were foolish enough to to try and make the game run on them. And again Microsoft succeeded in sucking away a day of our lives, to save you the time brave traveller,

For now, forget mobile gaming in Internet Explorer, Satan couldn't be bothered with implementing anything useful.