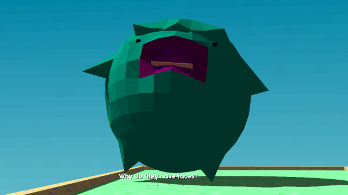 Bunion was made in three days especially for LD 40, and everything minus the music soundtrack was created by us. In the game, players feed smiling pieces of tofu to a growing Bunion, until he floats away ala Marjorie Dursley in Harry Potter and the Prisoner of Azkaban.

Despite tofu being an extremely versatile source of protein, and growing in popularity due to the spread of veganism, we mainly chose bean curd after brainstorming what food most resembles a plain cube. We're unsure as to the underlying message of the game from a nutrition standpoint - eat tofu and get fat? Eat tofu and fly? But then we remembered it was being fed to an angry, forever-rotating green blob, and that it didn't really matter. To really get into the mindset of an angry, forever-rotating green blob, we acted out from a rock-paper-scissors, winner-takes-all contest of who would be Bunion, and who would get to throw large cubes at who, and played out how different elements would move. It would sometimes hurt.

Although tofu contains all eight essential amino acids and comes in a developer's favourite shape, it isn't particularly Instagram-worthy. To counter-act this, we added kawaii smiley faces to the tofu shapes in the game. However, when we realised we weren't on Instagram, we counter-acted this again by changing the smiley faces into actually dead faces when the tofu collided with Bunion. We felt this added much needed realism to the game, reminding players that eventually everything dies.

To create the sound effects in the game, we used a variety of household items. The sound of Bunion eating the tofu was made by Pete loudly eating pringles, and the sound of tofu missing his mouth is Pete slapping his own face, just like in the tantrum he had creating the game. We used a bike pump for the noise Bunion makes when he grows, and hit the open end of a drumkit pole to create the 'popping' sound when a player launches the tofu.

Overall, Bunion came 386th in Ludum Dare 40. But it did place 59th in the Humour category, and we are comedians after all. So we definitely were fine with that outcome. Yes. Below are the other results for the game.