In April 2017, we were commissioned by an independent opticians to create an interactive window display for their shopfront. We gave them Blink Bot, a robot built from our favourite material; good ol' bent K'NEX.

Blink Bot would sit in the window, and when passersby high-fived the glass he sat behind, his eye sockets would open and greet viewers with a shocked face.

The eyelid mechanism was controlled using a micro-servo and arduino and the code triggered blinks at random intervals. Because we're all about the interactivity, we hooked up a photodiode/light dependent resistor to the hand, so when a human hand is pressed to it (and the light level changes), Blink Bot’s eyelids raise.

To work at different light levels, we used a secondary LDR, which we would read the ambient light level and use that to detect a relative change in the hand LDR.

It survived being up for a month in the window of the opticians in Weybridge. 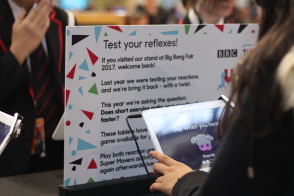 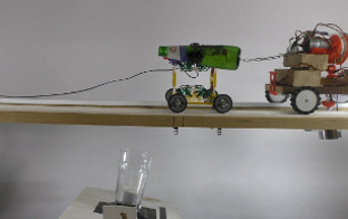